I got back from visiting my brother last week at UCSD. Huge campus. La Jolla is such a pretty place, great place to visit. What did we do? We ate like beasts! Here’s some pictures (click to enlarge): 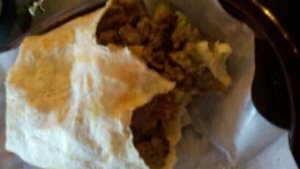 Only the champions get to sit here!

This Lucha Libre themed restaurant was featured on Man v. Food and it was easily my favorite Mexican spot during the trip. Fun atmosphere, fresh ingredients.

The next day we went to Phil’s BBQ. We went after the gym around 8:30 on a Tuesday night and the line was wrapped around the corner! I was like “yo, this better be worth it” And it was. 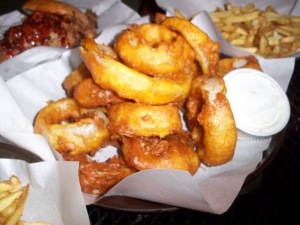 Before. Team Fatty Bros for life 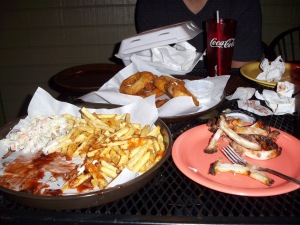 After. Even the champ had to tap out. SMH

It was kinda cloudy most of the week. But we still got some football throws in. 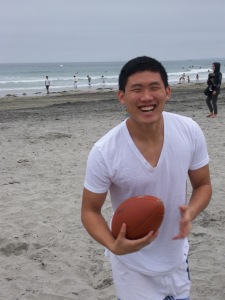 On the last day we went snorkeling off La Jolla cove. We went into the caves, saw the aquatic life, and swam up mad close to the sea lions. I thought one of them might belly flop me. Someone even caught a manta ray with this bare hands Crocodile hunter status! I hadn’t been snorkeling since 08 in Vietnam and its something I wish I did more often. I always have a great time.

There’s a new episode of Amos Song TV coming up but I’m having some…uh…production delays. But coming soon!

Right now I’m in San Diego vising my brother, I’ll be here for most of the week. I got here yesterday and man his apartment is a mess! Well maybe its pretty standard for 4 college guys coming out of post-finals. Plus I’m lightweight OCD. But we got dishes to the ceiling and empty food wrappers everywhere. One of these fools left out a bag of opened kimchi for god knows how long. And if you’ve smelt kimchi you can imagine what it smells like. HELLA FOUL. So I just got done deep cleaning the shit out this joint. Anyway, later this week, we might go snorkeling and eat Mexican food.

I also saw my good homie Martin out in LA. We visited Redondo Beach and had a nice conversation walking along the beach (pause). I wish I could have stayed longer hanging out on the pier eating funnel cake. Next time.

And congrats to the Dallas Mavericks. I know I incorrectly picked the Heat in 7 but I’m glad Dirk got his and I’m especially happy for J. Kidd, Bay Area native and fellow Cal Bear. I’m also relieved the Heat Inquisition has yet to begin. The Heat probably played better the first 4 games but Mavs were really able to clamp down on D when it mattered.  Also, the blame game has started with LBJ but DWade had some costly turnovers down the stretch and Bosh has yet to play a consistent playoff series. At the end of day, basketball is a TEAM sport that needs all 12 guys whether they play 48, 5, or 0 minutes, to step up and be focused. And what LeBron aka “The Hockey Player” (no 4th quarter) says here bothers me a little:

But its also an important reminder for us “normal” people to not take fandom too far, from athletes to singers to actors. Because at the end of the day, LeBron bleeds just like us.

Oh, I saw X-Men earlier this week. The movie is just okay but Magneto’s outfits are FRESH!!

The purple turtleneck with the brown leather EGHHHK!!!

Oh and I’m salty that there’s no longer a Barnes & Noble, a Borders, or any other bookstore in the greater Fremont area due to the apparent illiteracy around here  or because of Amazon.com. Probably a little of both. So two weeks ago I went to the Fremont Main Library for the first time in about 5 years and I actually checked out some books. I read The Road by Cormac McCarthy, WAR by Sebastian Junger, and Cooking Dirty by Jason Sheehan. I recommend all of them. The Road is a story about a father and son trying to survive a in world where nukes have wiped out most of the population and really fucked up nature to the point where there’s no animals to eat and plants to grow. And the remaining humans are out to eat and rape you. Yeah pretty shitty life if you ask me. But the way my man Cormac paints a grey, drab world using minimalistic sentences is off the hook. Plus I’m a sucker for post-apocalypitc survival stories. And nah, I ain’t seen the movie yet. In WAR, Junger locks and loads with an Army infantry unit in the Korengal Valley in Afghanistan where the Taliban acts a goddamn fool. Great insight into the psychology of what its like to be a soldier at war. Cooking Dirty is a biography by a cook retelling his crazy experiences working in a kitchen at your favorite mid-level restaurant.  With this one, I drew a lot of parallels in my own life having seen the inner workings of a fast food restaurant. Next up for me:  American Psycho by Brett Easton Ellis

Sorry for the long random post and I hope everyone has a wonderful, blessed week!

I love you all,