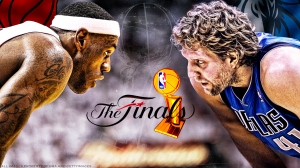 ‘Cause these sure ain’t your mama’s Mavericks. A shout-out to J. Kidd and Tyson Chandler for getting rid of the Mavs’ image as marshmallow-soft aristocrats. Also since 06, Dirk has added multiple dimensions to his game making his skillset as a 7 footer something we have never seen before. Jason Terry is the only other guy coming back from that 06 team and even he’s matured into a now much different role. The Heat also feature only two remaining players since 06, Wade and Haslem. The beloved Superman and Flash tandem (Shaq & Wade for those who don’t know) are gone and the Heat are now number 1 on the NBA’s Most Hated list.

But the 2011 Mavericks are back, still shooting the 3-ball but now showcasing great veteran point guard play, two things the Heat lack.  I expect the Mavs ability to spread the floor and Kidd’s crafty defensive playmaking to be the X-factors in the series. But the Heat have found success relying on their 3 superstars, as planned, on both sides of the ball. No one in the NBA is seeing their speed and athleticism. We’ll see if the 30 something Mavs can hold up.

But the 2011 Mavericks and Heat also have a lot in common with each other. Both teams are coming in hot, having lost only 3 games since the start of playoffs. The Mavs swept the #1 Lakers and the Heat just womp womped the #1 Bulls. Both teams have been hated on and doubted before and during the playoffs. Both teams have strong interior team defense and solid perimeter defense. I’ll even go to say Dirk and Bron are the two best scorers in the L right now. And I think that’s what makes it so hard to choose a favorite. And its also why I’m expecting a damn good series.

But I’m thinking it comes down to a couple of things:
(1) Bron Bron vs. Dirk: These guys cannot be stopped, hopefully contained. Whichever team is able to limit the other to jump shots is gonna come out on top.
(2) Quality vs. Quantity: The Mavs have a deep bench and solid role players. I say there’s about 8 guys on that team that can go off for 20. Can’t say that about the Heat. But as you know, the Heat have “Those Three”.
(3)Athleticism: Can the less athletic Mavs rebound and play transition D well enough against the Heat?

Will the wandering Mavs finally find the promised land? Or will the despised Decision Triumvirate begin their tyrannical reign? Either way, I’m real excited about the series. I hope you tune in. It starts Tuesday, May 31 6PM on ABC.

My prediction: The Empire strikes back in 7.

I’m so inspired by my friend Martin’s great blog (http://martinmarrufo.blogspot.com) that I’ve decided to take a shot at launching one myself. 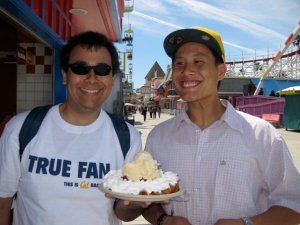 Two sexy bloggers killing that funnel cake! (Me on the right, Martin on the left) (Photo credit: JPatzer)

I’d be really feeling myself if I was to say I’m half the writer he is but I promise to give you a healthy helping of what’s going on in my life delivered 100%, unfiltered Amos-style. We’ll talk anything and everything — life, sports, random thoughts, movies, music, books, food, whatever that floats the boat. Hell, we might even see a reboot of Amos Song TV. So until then check out the About page and stay tuned.