The Man in the Arena

The Man in the Arena

“It is not the critic who counts; not the man who points out how the strong man stumbles, or where the doer of deeds could have done them better.

The credit belongs to the man who is actually in the arena, whose face is marred by dust and sweat and blood;

who errs, who comes short again and again, because there is no effort without error and shortcoming;

but who does actually strive to do the deeds;

who knows great enthusiasms, the great devotions; who spends himself in a worthy cause;

who at the best knows in the end the triumph of high achievement, and who at the worst, if he fails, at least fails while daring greatly, so that his place shall never be with those cold and timid souls who neither know victory nor defeat.”

Theodore Roosevelt’s speech Citizenship In A Republic, delivered at the Sorbonne (1910).

Wow I haven’t posted since San Diego back in June. Someone e-slap me when that happens. I refuse to let this blog die like *ahem* (http://martinmarrufo.blogspot.com/, jeffpatzer.com).

Anyway, I forgot to post this before Thursday but here it goes. Amos Song Variety Show NFL Pick ‘Em! Let’s see how many of these I get right. 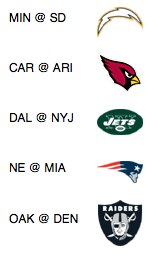 So excited to see the start of the season, about 2.5 hours away! I think its interesting that the rest of the US takes they’re sports way more serious than out here in California and especially compared to the Bay Area. It might be because Bay Area teams haven’t had too much success lately but the Giants won the Series last year. Or it might because the market is divided between SF/East Bay? Or we don’t like being American. I don’t know. Oh and did you know that a California stereotype is that we’re “healthy”? Like organic foods, jogging outdoors, nature and shit. People be like do you really grow your own food and hike in the woods? haha

Beantown is a cool place. One block south and I’m on the set of The Wire and one block north I’m in foodie sword swallower carpet muncher land. I love my neighboorhood. All love.